Our Thomas wins the GOLD! 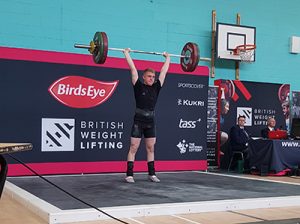 Olympic Weightlifting is considered as one of the greatest tests of strength and power, and competitions are the stage on which the sport comes to life.

Before any lifting begins there is a weigh-in to register the actual body weight of all athletes competing. This determines which of the eight weight categories they will be competing in.

The weigh-in is also when athletes announce the first weight they will attempt to lift in both of the Olympic lifting styles – ‘The Snatch’ and ‘The Clean & Jerk’.

The athletes will have three attempts to record their highest lift in both the Snatch and the Clean & Jerk. The Snatch is attempted first and the barbell is loaded on the lifting platform in order of progression. 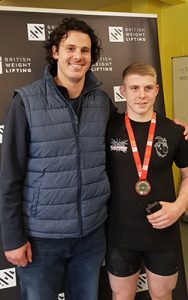 Three referees watch on as the athletes attempt their lifts. Each referee has a control box with two buttons; one is white and the other is red. The white button is pressed when the referees have judged a lift as ‘Good’. The red button is pressed if the referee believes the athlete has committed a fault during the execution of a lift and a ‘No Lift’ decision is made.

A majority judgement is required from the referees to determine whether a lift is ‘Good’ or ‘No Lift’. For example, if two referees press the white button to indicate a ‘Good’ lift and the third presses the red button, the majority will be accepted.

An athlete’s score is calculated by combining the best successful lifts in the Snatch and the Clean & Jerk. The winner of the competition is the athlete with the highest combined total.

Thomas achieved 84kg Snatch, and 107kg on the clean and Jerk Lift on the day, he got 6 GOOD LIFTS, both the lifts were Personal Bests for Thomas, he had only achieved 83kg Snatch and 106kg in the gym where he trains so this was an amazing achievement, he beat the silver medallist by 20 kg, He smashed it on the day

Got a question? Want to speak to a real human?
Use the form below and we’ll call you back ASAP.